For up to 5 Persons

La Salamandrija Rural House is a renovated house that has 3 bedrooms and has a maximum capacity of 5 persons (4 beds and an extra place). All rooms have air conditioning and heating for added comfort. What makes this accommodation special is that it has been designed to adapt to all types of audiences (families with children of all ages, small groups of friends, couples, workers who want to telecommute... and we have even thought of our furry friends, offering them a bed so they can be comfortable). With firewood always available, we have a fire place in the living room to warm us on winter days and a barbecue in the courtyard to enjoy during the summer. The house is cozy and transmits peace, which makes it perfect for an escape from the routine. As for nearby services, it is close to: tapas bars, restaurants, gas station, health center (with 24-hour emergencies), pharmacy, supermarkets, hardware store, municipal swimming pool...

Our prices vary depending on the season and the number of persons. Check availability below  checking the price of your stay.

In the foothills of the Sierra de San Pedro, dominated by a pasture ecosystem of cork oaks, holm oaks and strawberry trees, is the friendly town of Cordobilla de Lácara. It is attributed its foundation in the 9th century to Muslim settlers from Cordoba, a topominia that connects its name, deriving the appellative of Lácara from the stream in which it sits. 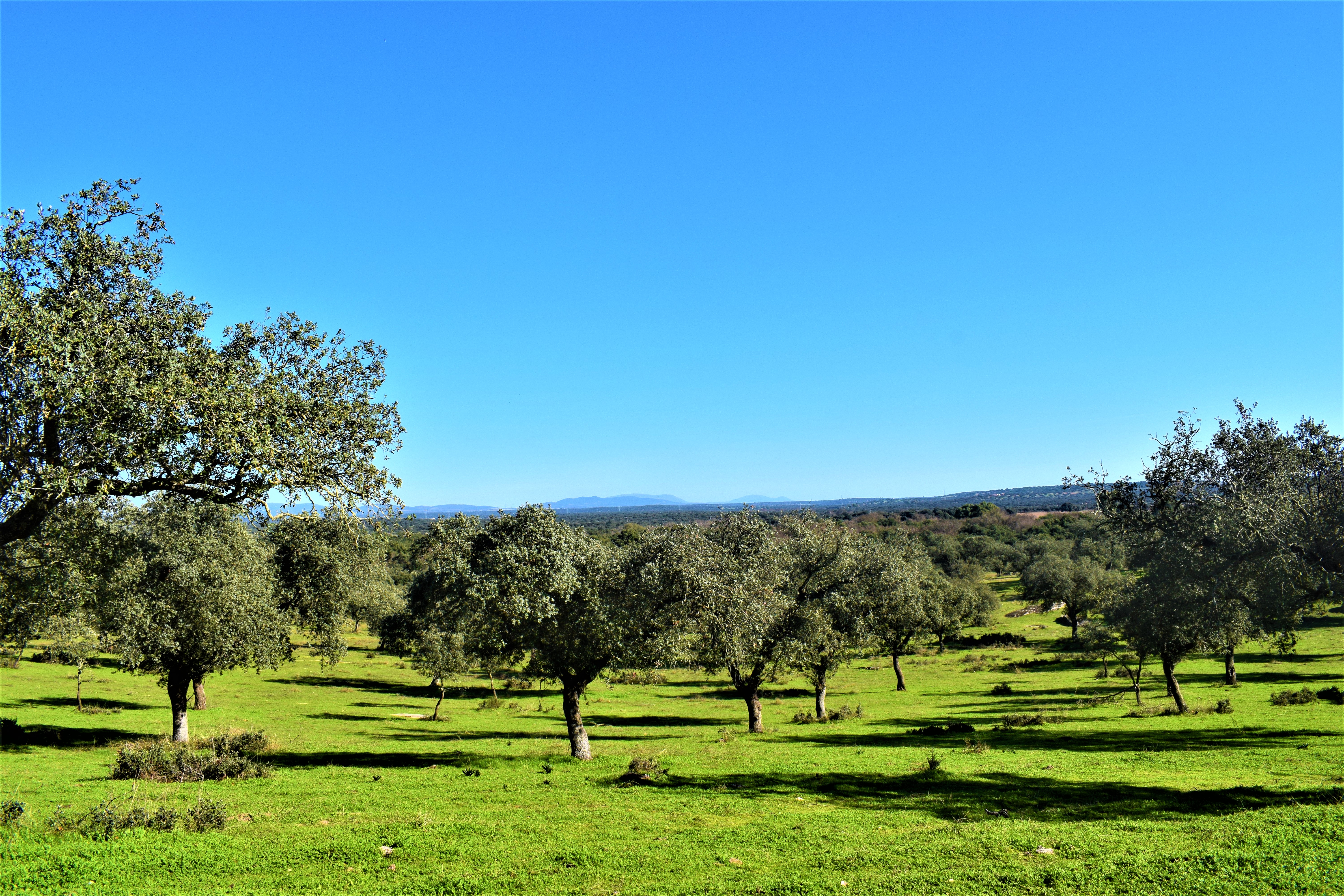 In the vicinity of Cordobilla is the Lácara Dolmen. It is one of the most important megalithic complexes in the Peninsula, declared a National Monument in 1931 and later designated as a Site of Cultural Interest. Its production of organic virgin olive oil is one of the benchmarks in all of Europe, obtaining this product from healthy olives at their right point of maturity. 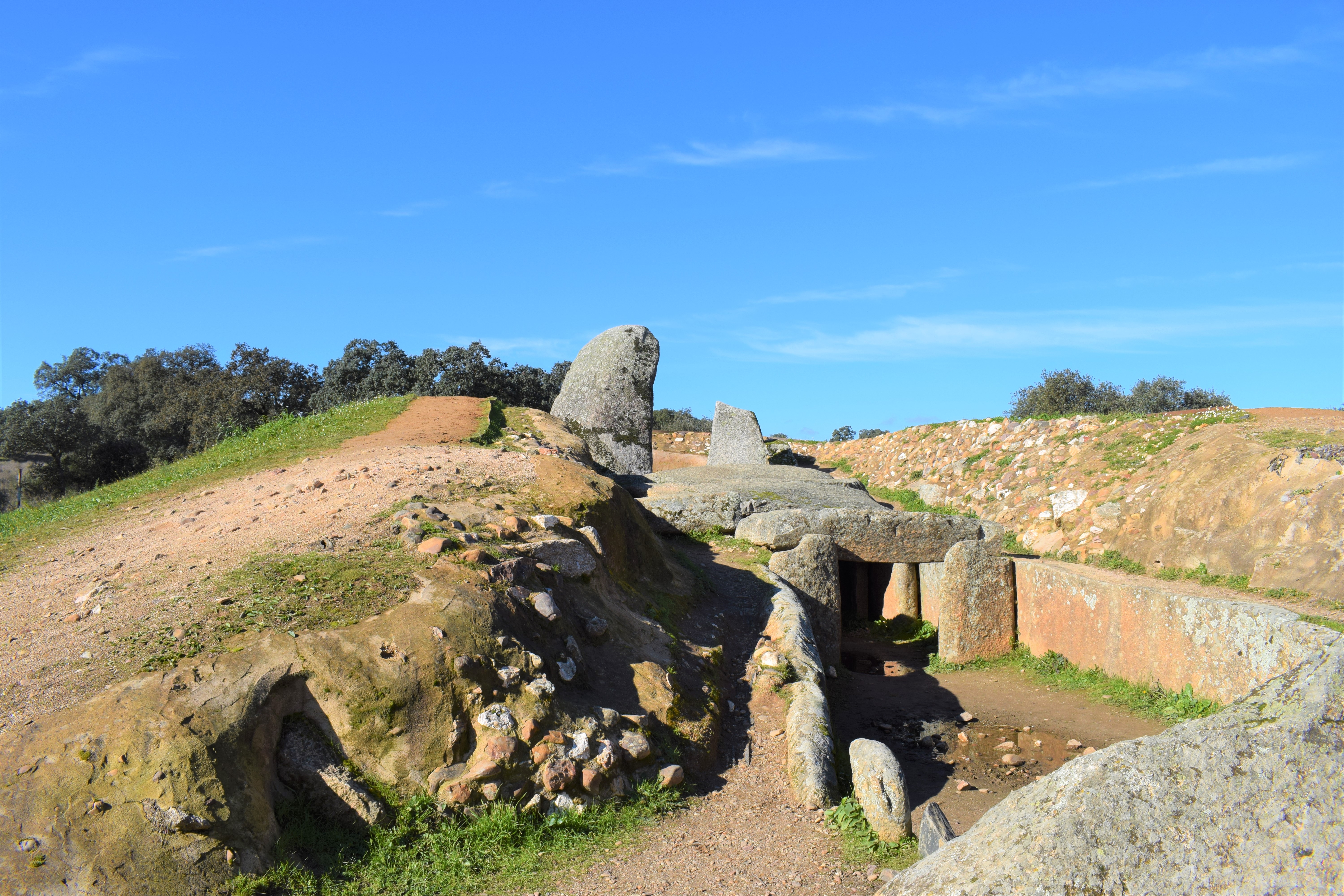 Located in the town square, we find this temple of simple construction and small proportions, with a shallow tower on feet facade. Originally from the 16th century, it has a single nave divided into three sections, with an interior space covered by three types of vaults: a dome on pendentives at the head, a cannon with lunettes in the only nave and a exposed brick rib on the choir. It is made up of ashlar masonry and masonry, reinforced with buttresses. It has three entrances. The main portal is the one located on the imafronte, with a semicircular ashlar arch,while the one located on the side of the gospel is half a point lowered. Inside, the main altarpiece stands out, made of gilded wood, with three streets in which interesting paintings and images are housed. Among the images that the church houses, a carving that represents Saint John the Baptist stands out, probably made in the 16th century.

HERMITAGE OF SAINTS JUSTO AND PASTOR (LOS SANTITOS)
The hermitage of the new plant is located in the well-known Cerro de El Santo. It was built in the 60s, with a stone and mortar factory and covered with red clay tiles. In its access on foot we find a simple portal with a semicircular arch and a narrow tower. The images of the saints are in the Iglesia San Pedro Apóstol for security reasons due to their great value and antiquity (probably from the 16th century).
CHAPEL TO THE VIRGIN OF FATIMA
The virgin who appeared in 1917 in Cova de Iria (Portugal) to three young pilgrim shepherds through Spain in the 50s and passes through our town.It is believed that a miracle occurred during their arrival.She was surrounded by white pigeons that stopped and one of them landed on a short nearby. Over the years, the short turned into a beautiful holm oak, which according to the locals is miraculous, since one of its branches gives acorns with the mantle or figure of the Virgin.
DOLMEN OF LÁCARA, MEGALITHIC ART
Over 4,000 years of history attest to the importance of this burial site which has survived virtually intact to the present day. Standing near the road from Nava de Santiago to Mérida, the Dolmen of Lácara was declarated a National Monument in 1931. This megalithic site stands amid a picturesque landscape of dehesa pastureland, baneath the remains of gigantis burial mound. Though not all of the site has survives, the Dolmen of Lácara is still the largest on the Iberian Peninsula and without doubt one of the monumental treasures os Extremadura's rich heritage.
There is a 20 metre-long passage that divides it into three parts. The passage leads to the burial chamber itself. The chamber is formed by five huge granite stones, each over 5 metres tall. It has polygonal floor plan and it 5 metres in diameter.
The majesty and size of the site reveal the huge task involved in building such places in the late Neolithic and early Copper Age. As well as a burial site, it was also a place of worship. 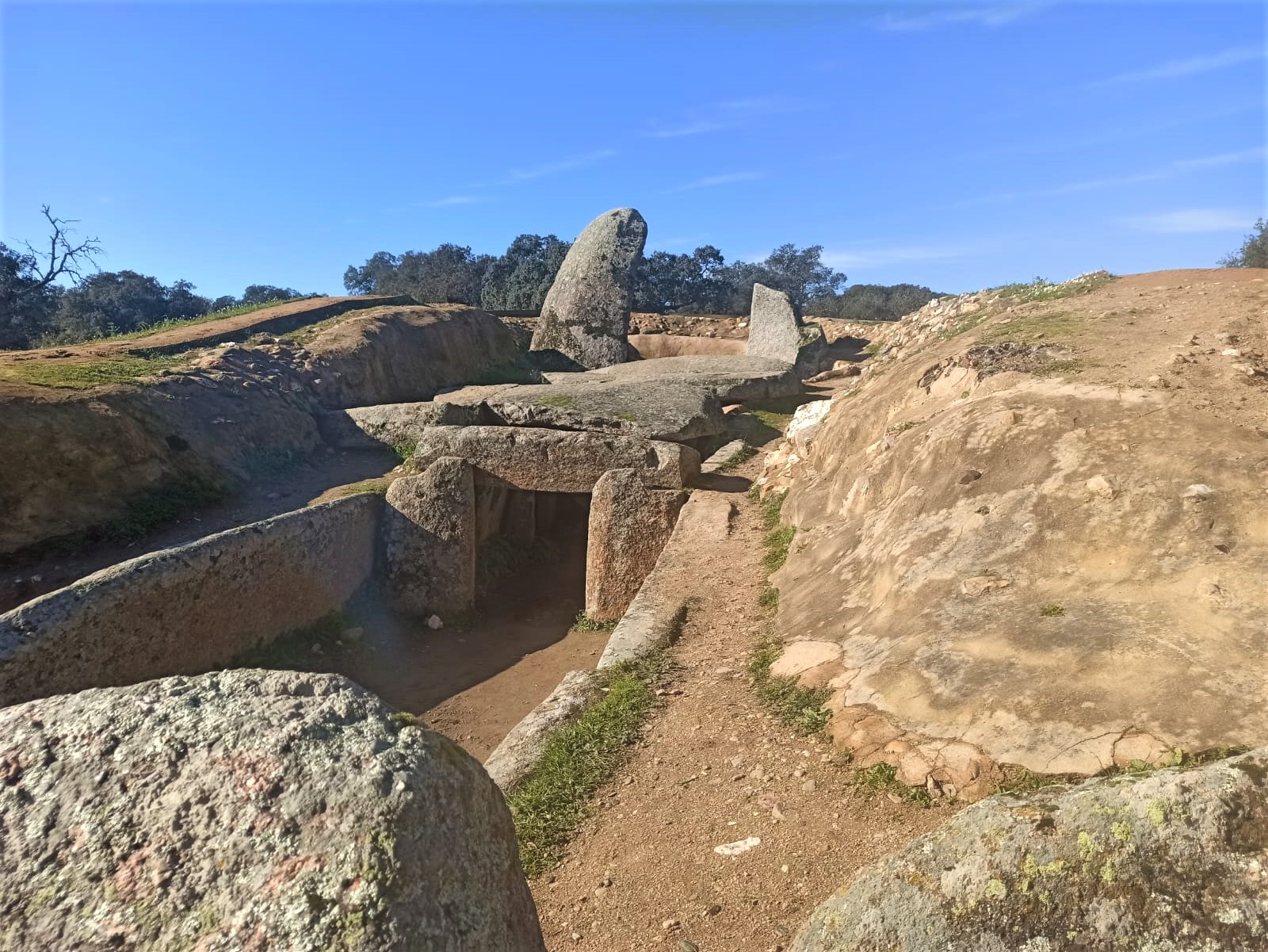 NATURE AREAS
The beauty of its surroundings and the maintenance of traditional agricultural systems make its term one of the richest natural spaces in conservation of the Mediterranean forest.
HORNO-TEJERO AND BOQUERÓN RESERVOIR AREA
At the end of the 70s, the construction of two reservoirs in the National Hydrological Plan was approved next to Cordobilla de Lácara on the Lácara River and one of its tributaries. These reservoirs, Horno Tejero and Boquerón, were inaugurated in 1985.
If you love fishing, set off on one of the most delightful voyages on inland waters. The main fish are carp, pike and black-bass.
This wetland, which covers part os the municiplities of Cordobilla d e Lácara and Cáceres, to the north of the town of Cordobilla de Lácara, is considerated a singular space for fishing in inland waters. The animals that inhabit the area include Mediterranean turtles and otters and terms of birds, large breeding groups of cattle egrets.
The Horno Tejero and Boquerón reservoirs have contributed to the appearance of new flora and fauna that were not typical of the area, thus enriching the already abundant natural variety that existed prior to the construction of dams. They have also promoted new activities in the area such as fishing and hiking. 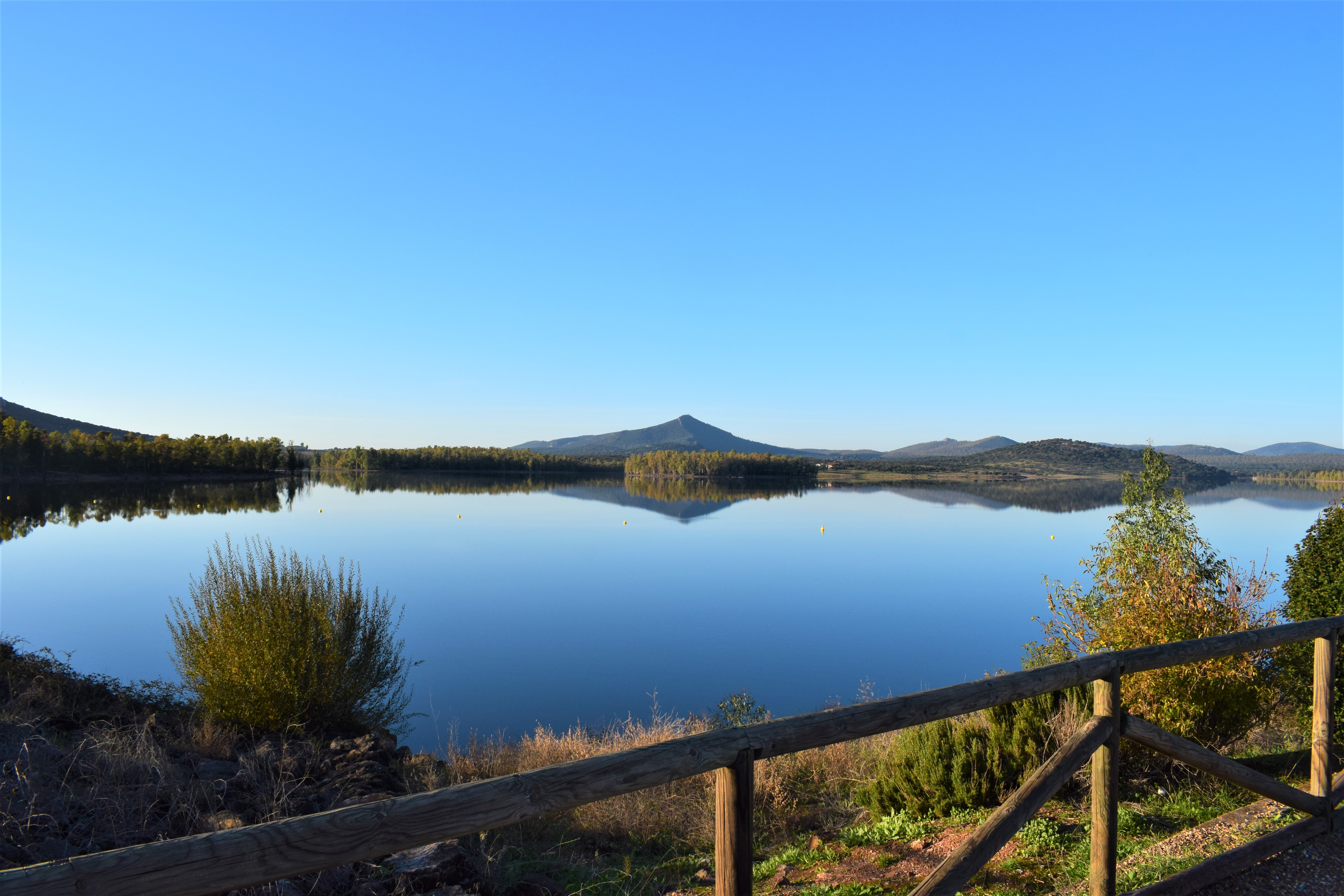 WELLS AND FOUNTAIN OF MADROÑAL
Several wells are still preserved today, such as the Well of the Brotherhood, Pozo de la Vega and the Pozo del Chorrero, which in their day supplied water to the residents and cattle of Cordobilla de Lácara. Also noteworthy is the Fuente del Madroñal located in the Boquerón reservoir.
FAIRS, FESTIVALS AND TRADITIONS
LOS TUEROS - CHRISTMAS EVE
Christmas Eve night is celebrated with great enthusiasm around a bonfire that young people have been piling up over the weeks in the Plaza del Ayuntamiento. 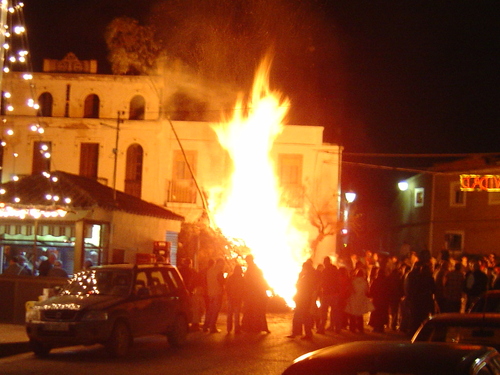 PATRONAL FEAST OF THE SAINTS
From August 5 to 8. 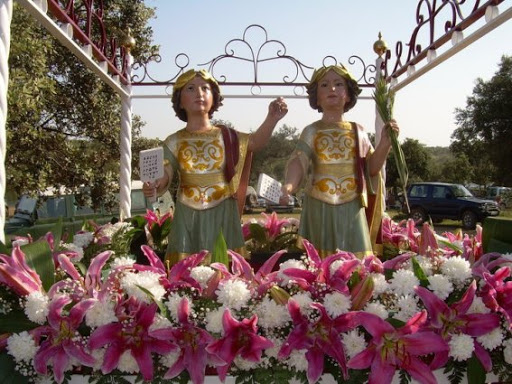 PILGRIMAGE THE SAINTS JUSTO AND PASTOR
First Sunday in May.
GASTRONOMY
The most characteristic typical dishes of our town are the lamb stew, the gazpacho and the Extremaduran stew. La Salamandrija is located on the main avenue of Cordobilla de Lácara. Easily located and accessible by car, it offers parking facilities on the street, in front of the house or a few meters away. In addition, its location makes it privileged, being 55 km from Cáceres and 44 km from Mérida. Among its many tourist attractions we can highlight its proximity to the Horno Tejero and El Boquerón reservoirs, which are known and frequented by fishermen from all over the world due to the size of their catches. Fishing permits are purchased at a bar located 70 m from the house, allowing you to combine this sport with a family getaway for all audiences. Likewise, it is an attractive area for hunting, bird watching (the Horno Tejero ornithological route has several viewpoints and bird observatories), mushroom gathering and stargazing. 20 km from Cordobilla is what is possibly the most spectacular megalithic monument in the Extremadura region, the Lácara Dolmen. The environment of Cordobilla de Lácara offers multiple alternatives for doing sports in nature, disconnecting and relaxing.

You can get to Cordobilla de Lácara by different paths.

From Cáceres, by the A-66, deviate towards Carmonita and straight ahead.